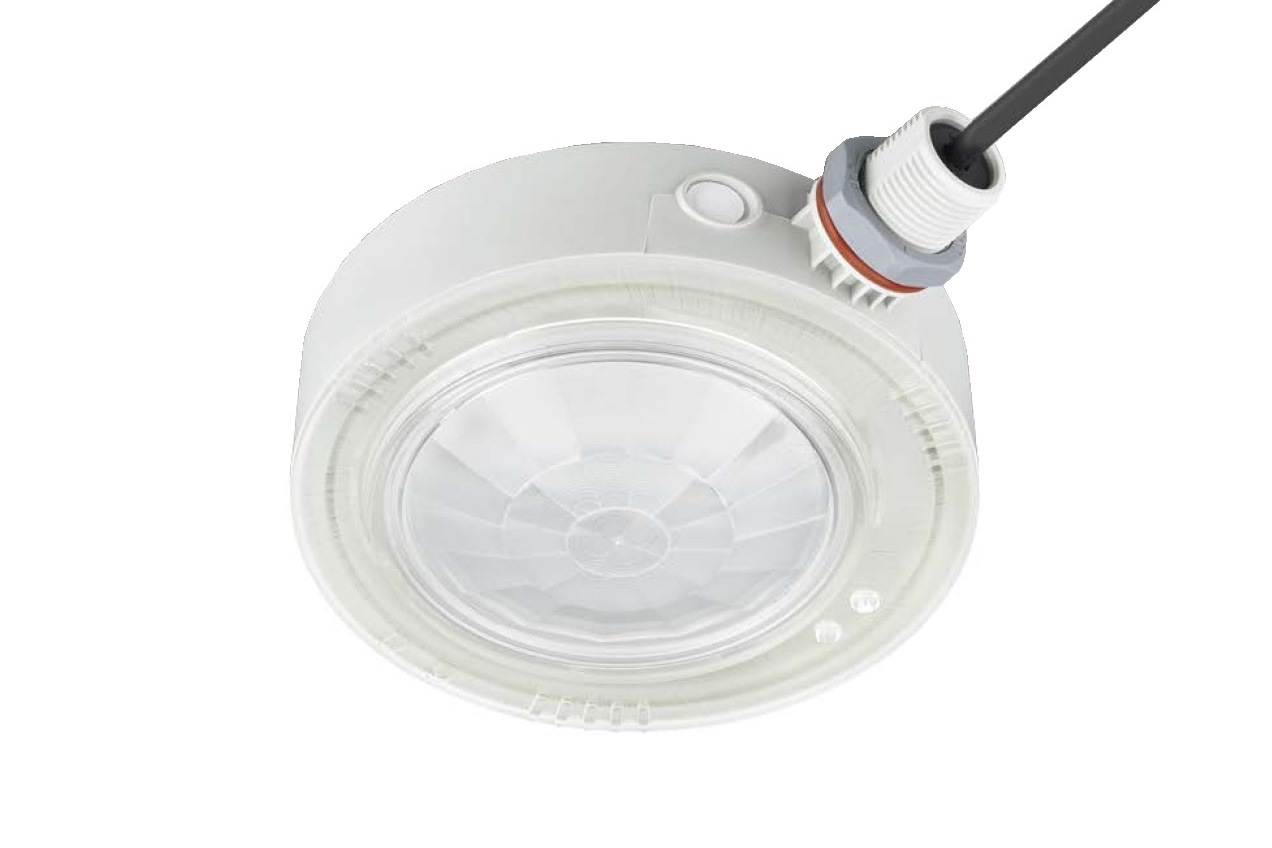 Fixture mounted HBEAIR sensors ensure lighting is only on when and where it is needed. The sensors in combination with can bring huge benefits in terms of energy management as they provide occupancy detection and daylight sensing for heights up to 16 meters. Energy saving - typically between 30% and 50%. HBEAIR can be easily programmed via an Android smartphone, that offers immense flexibility to commission luminaires into groups and further divided in zones wirelessly.
HBEAIR includes advanced grouping functionality which enables occupancy sharing and zoning capability. Up to 40 sensors can be operated together in a single group, and the group can then be divided into a maximum of 6 zones. With this advanced functionality, the group can be programmed such that a zone comes up to full light level upon motion detection while other zones dim up to a lower background light level. This enhances energy savings while still providing lighting in adjacent areas.
Application: warehouses, assembly areas, cold rooms. 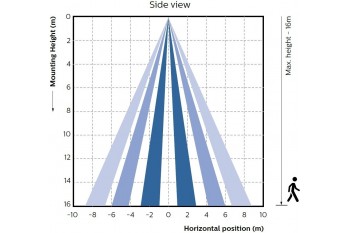 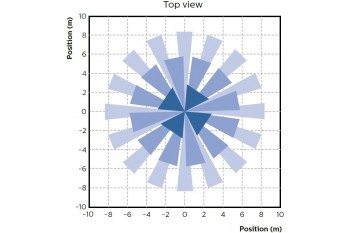 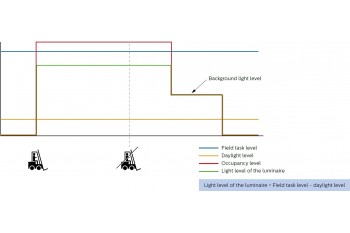 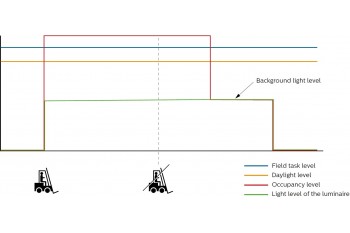 All the lighting control parameters are stored in the sensor, and it is possible to configure most of these parameters through NFC or IR. Figure shows a pictorial representation of the occupancy based lighting control.
-Fade to switch on/off time: Fade to switch-on time is the time (T1 to T2) from the point at which occupancy is detected until the lights dim up to the max light output. This timer is set to 0.7 sec and is not configurable.
-Hold time: Hold time is the time (T3 to T4) from the point at which the last movement has been detected (e.g. occupant left the room) until grace time starts. This timer is set to 15 minutes by default and can be configured from to 1 – 120 minutes.
-Grace fading time: Grace fading is the time from T4 to T5 during which the lights are being dimmed down from the current light level to the background level. By default, grace fading time is 10 sec and can be configured to 0 – 25 seconds.
-Prolong time: Prolong time is the time from T5 to T6 at which the background level is maintained at a fixed level. Default prolong time is 15 minutes and can be configured from 0 – infinity (This would ensure that the lights never switch off).
-Fade to switch-off time: Fade to switch-off time is the time (T6 to T7) for the lights to fade from background level to off after prolong time is expired. This timer is set to 0.7 sec and is not configurable.
-Field task tuning level: Field task tuning level is used to configure the required light level on the task plane. Setting this to 100% enables the installed maximum light level. A lower percentage level can be configured to set the new maximum light level of the luminaire through the app.
-Background level: Background level is a light level significantly lower than 100%, used to save energy when space is not occupied.
-Group occupancy sharing: Group occupancy sharing is a configurable feature to allow HBEAIR to share its local occupancy detection status and control lights accordingly. As long as presence is detected within the group, the luminaires stay on at the background light level in non-occupied areas.
-Group light behavior: Group Light Behavior is a configurable feature that allows to choose how the other luminaires in the group respond to occupancy detected by a luminaire in the group. The options are background light level and field task level.
-Occupancy mode: Occupancy mode is a configurable light level for the luminaires in non-occupied areas while there is occupancy detected elsewhere in the group, there are 3 options to choose from:
Auto-on/off mode: Lights are switched on and off automatically based on occupancy detection and time delay settings.
Manual-on/auto-off: Lights are turned on manually through a wireless switch and turned off automatically, as a vacancy sensor.
Manual-on/off: Lights are turned on and off manually through a wireless switch. This mode simply does not make use of the occupancy sensing functionality.
-Daylight based control: When daylight based control is enabled and if occupancy is detected, the luminaire(s) remains always switched on at the calibrated light level based on daylight harvesting as discussed above. In case enough daylight is available, this situation leads to higher energy costs.
-Daylight dependent switching: When daylight based control is enabled and as long as the occupancy is detected, the luminaire never switches off the light. Even at the brightest daylight levels, the luminaire dims down to background light level; this situation leads to higher energy costs. With Daylight dependent switching (DDS) functionality, if there is enough daylight the sensor switches off the luminaire leading to lower energy costs. The sensor switches off the light when:
the luminaire is already switched on and
an “Auto On/Off” occupancy mode has been configured and
the measured light level on the local sensor is above the threshold value (150% of the daylight regulation setpoint) for more than 15 minutes. The
15 minutes is reset as soon as one of the above conditions is not met. The fade time for turning off the light is ∼30 seconds.
The sensor switches on the luminaire(s) when:
the light level on the local sensor is below the daylight regulation setpoint and
there is presence, either local or elsewhere, detected in the room A “Manual On” request overrules DDS, the luminaire(s) switch on and the time period of 15 minutes is reset. This is because the user expects light control when pressing a button manually. 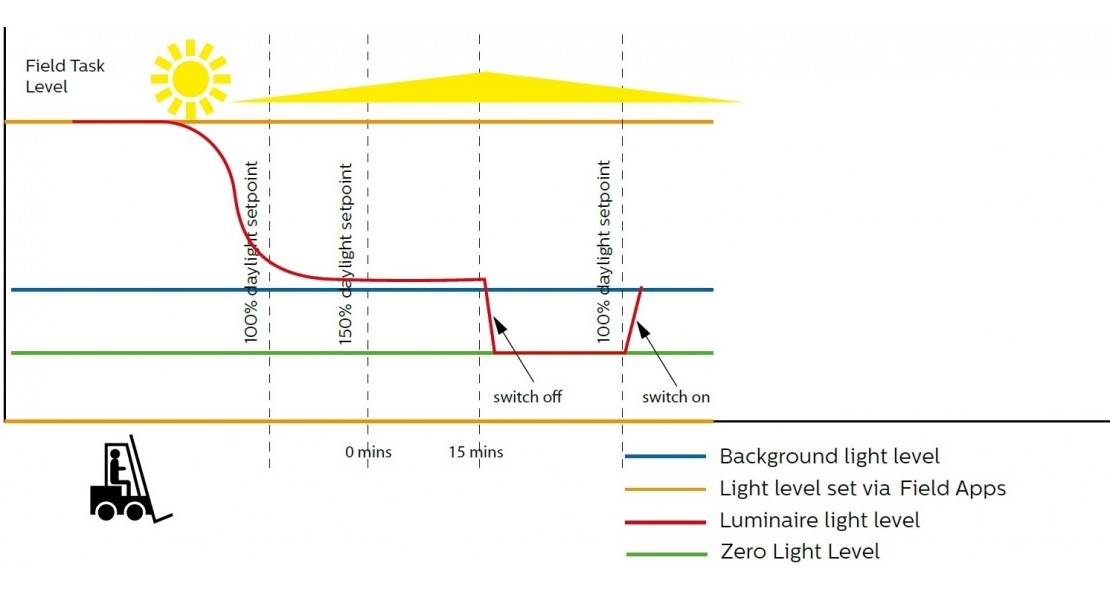 -Daylight dependent override: With Daylight dependent override (DDO) functionality, in the presence of sufficient daylight along with occupancy detection, the luminaire(s) will not switch on until the daylight levels become insufficient i.e. below the daylight regulation setpoint. From that moment, the output light levels are switched on and adjusted to compensate the lack of daylight. In this way, energy costs are reduced. In other words, when DDO is enabled, the sensor keeps the lights switched off while maintaining enough light in the room for the end user when:
the lights were initially switched off due to a vacant room and
presence, either local or elsewhere in the group, was detected and
an “Auto On/Off” occupancy mode has been configured and
the measured light level is higher than 150% of the daylight regulation setpoint.
When the measured light level drops below the daylight regulation setpoint, the lights switch on again. 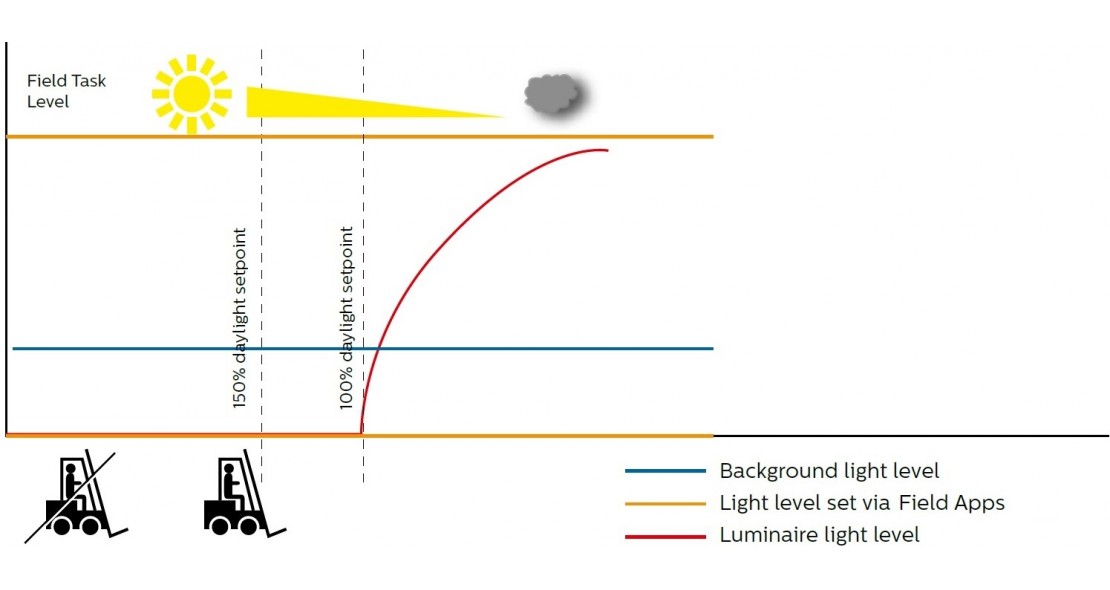 Grouping allows multiple luminaires to connect with each other using a Zigbee network and broadcast occupancy status. The grouped luminaires can be configured for desired behavior for presence detection based on installer settings, e.g. the light behavior of the rest of the luminaires can be configured for maximum brightness (called as ‘field task level’ in further documentation) or background light level.
Zoning allows sub-grouping of luminaires. In an industrial setup such as warehouses, it would be beneficial to have an aisle turn on to field task level while adjacent aisles switch on and go to background light level on presence detection. In another scenario, if a forklift truck enters a very long aisle, it would be beneficial to only bring the first 5 luminaires, for example, to maximum brightness/field task level and the rest of the luminaires in the aisle to background light level. This avoids the tunnel effect, driving or walking into a dark tunnel or lighting up the whole aisle unnecessarily.

Here is an example of the group occupancy sharing and zoning behavior in a warehouse application. 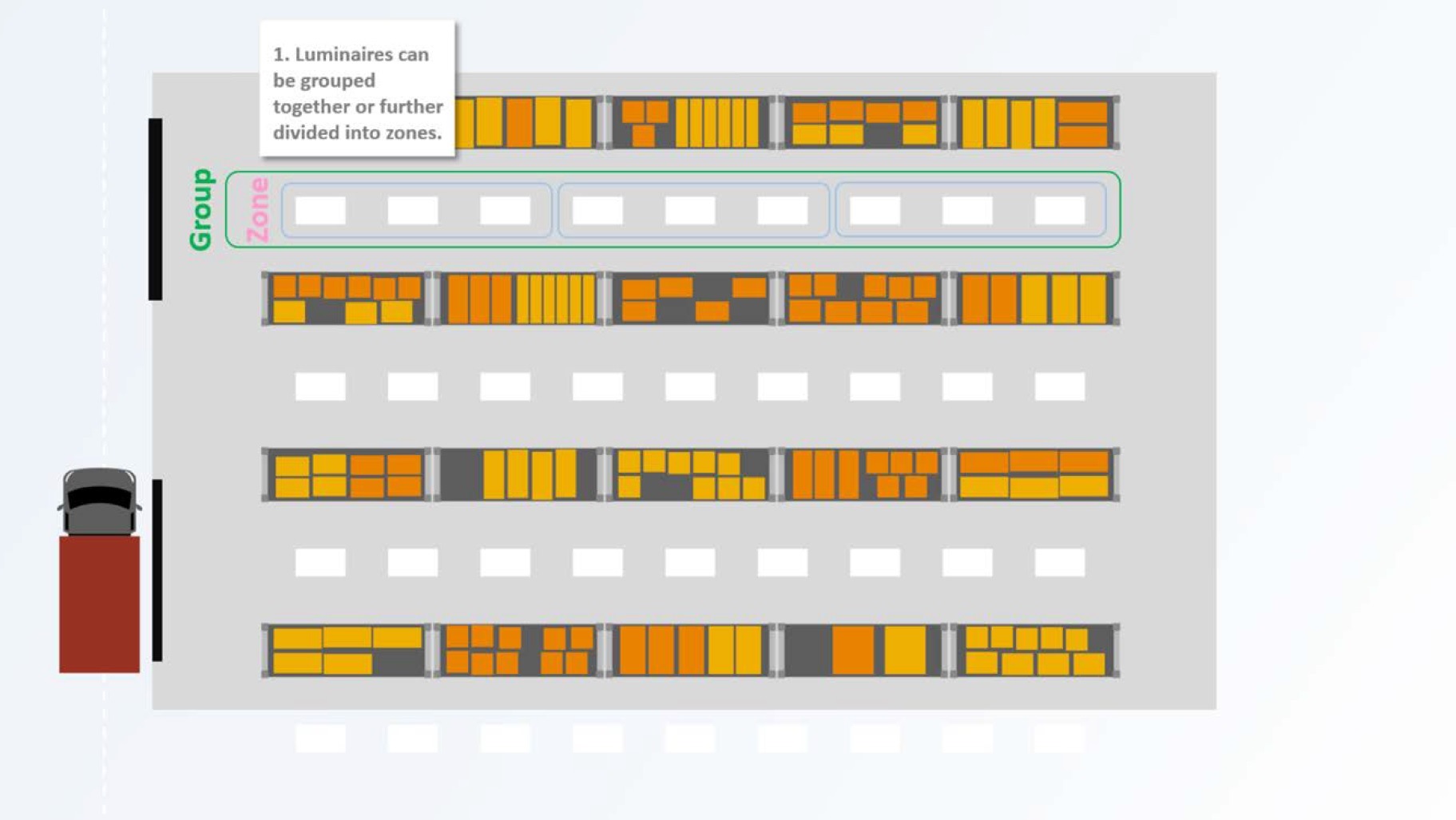 1. Luminaires can be grouped together or further divided into zones 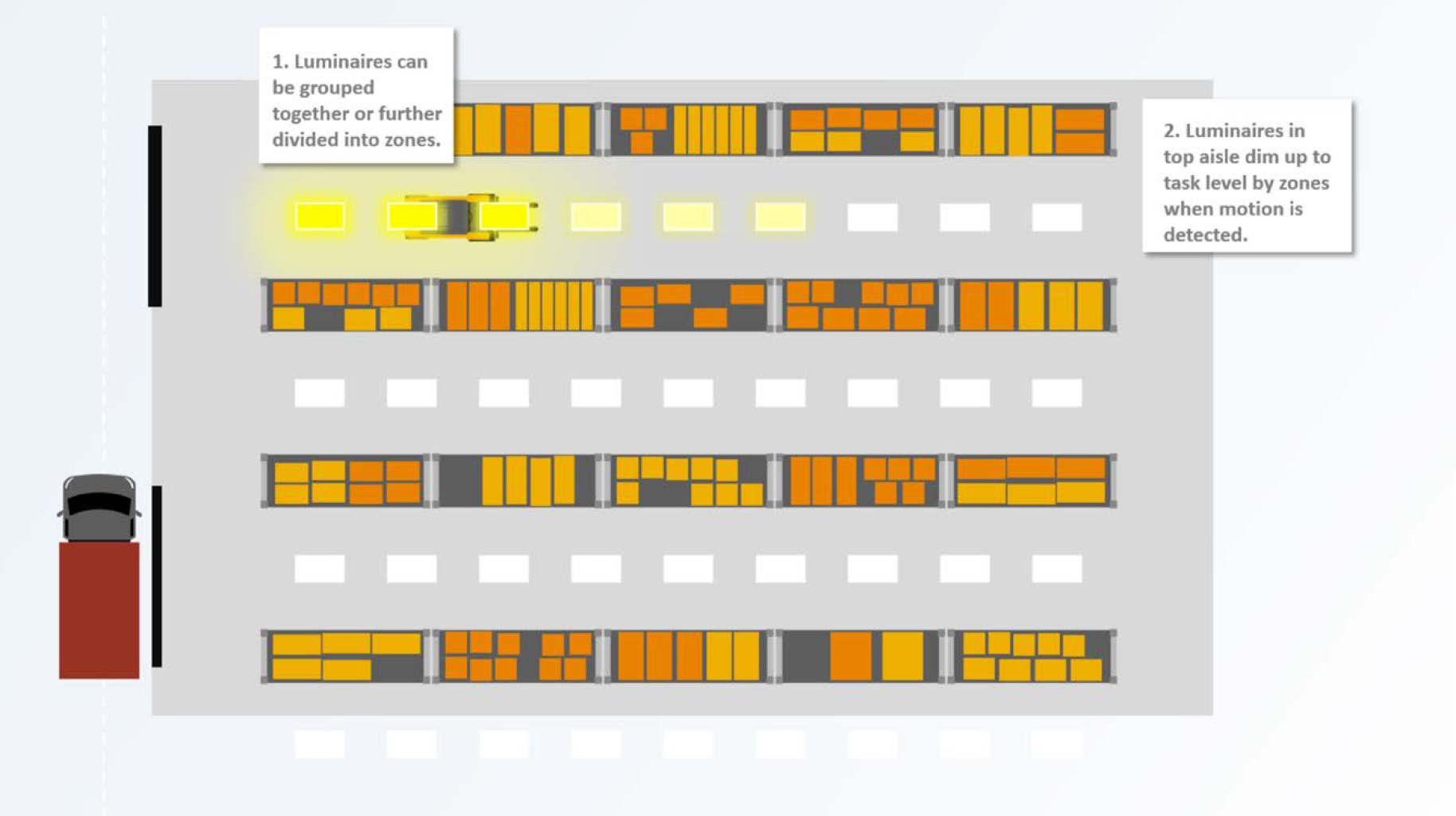 2. Luminaires in top aisle dim up to task level by zones when motion is detected 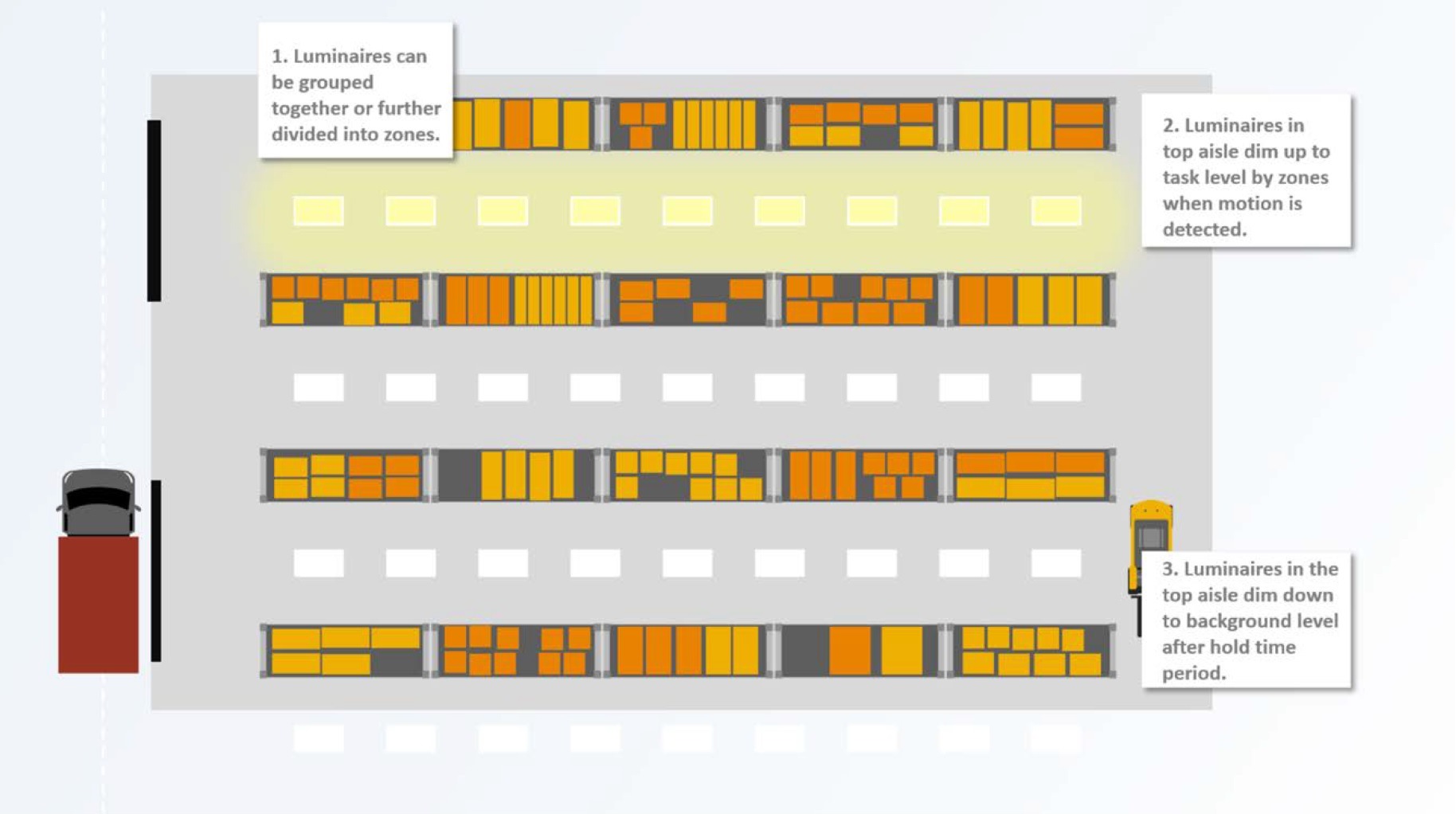 3. Luminaires in the top aisle dim down to background level after hold time period 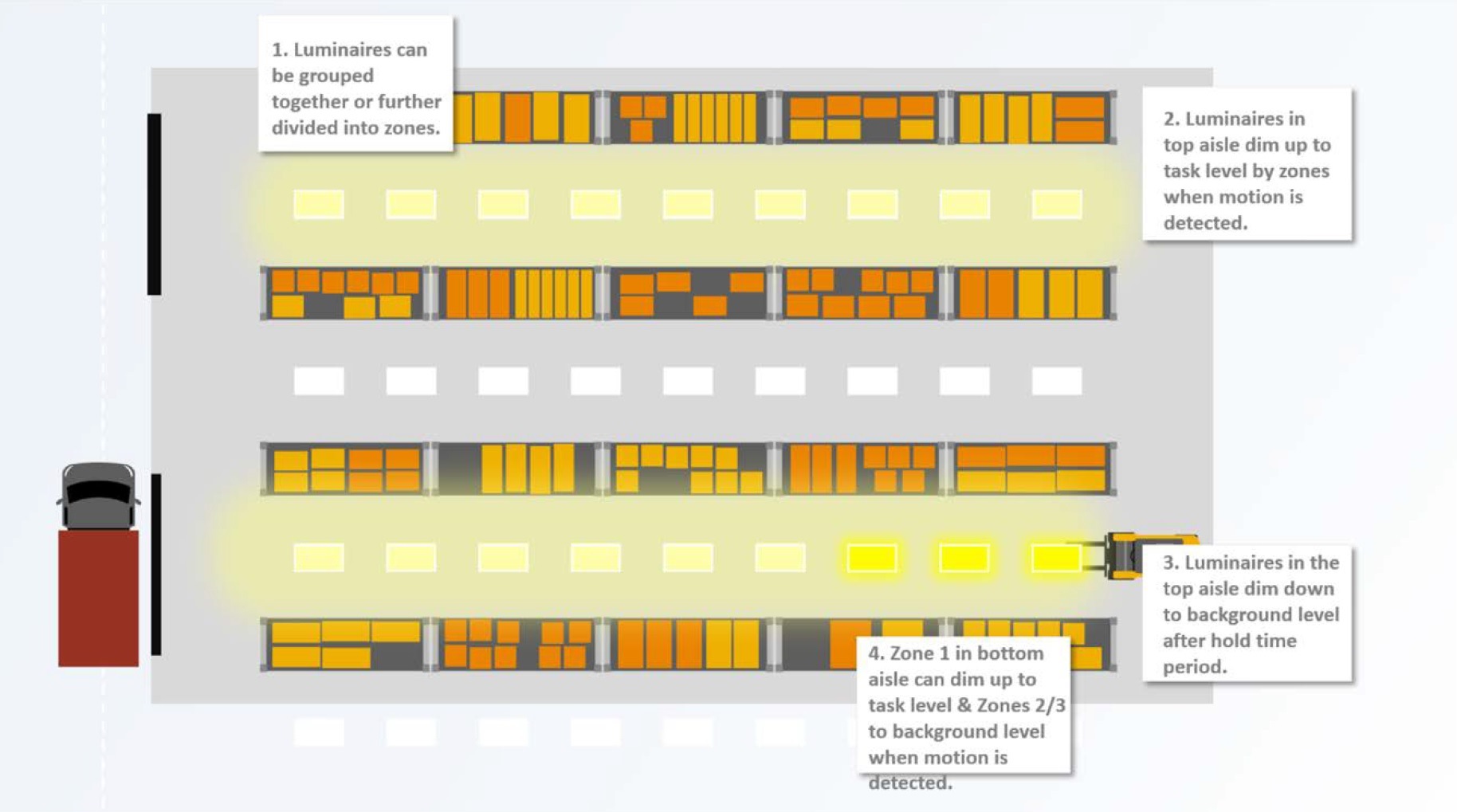 4. Zone 1 in bottom aisle can dim up to task level and Zones 2/3 to background level when motion is detected 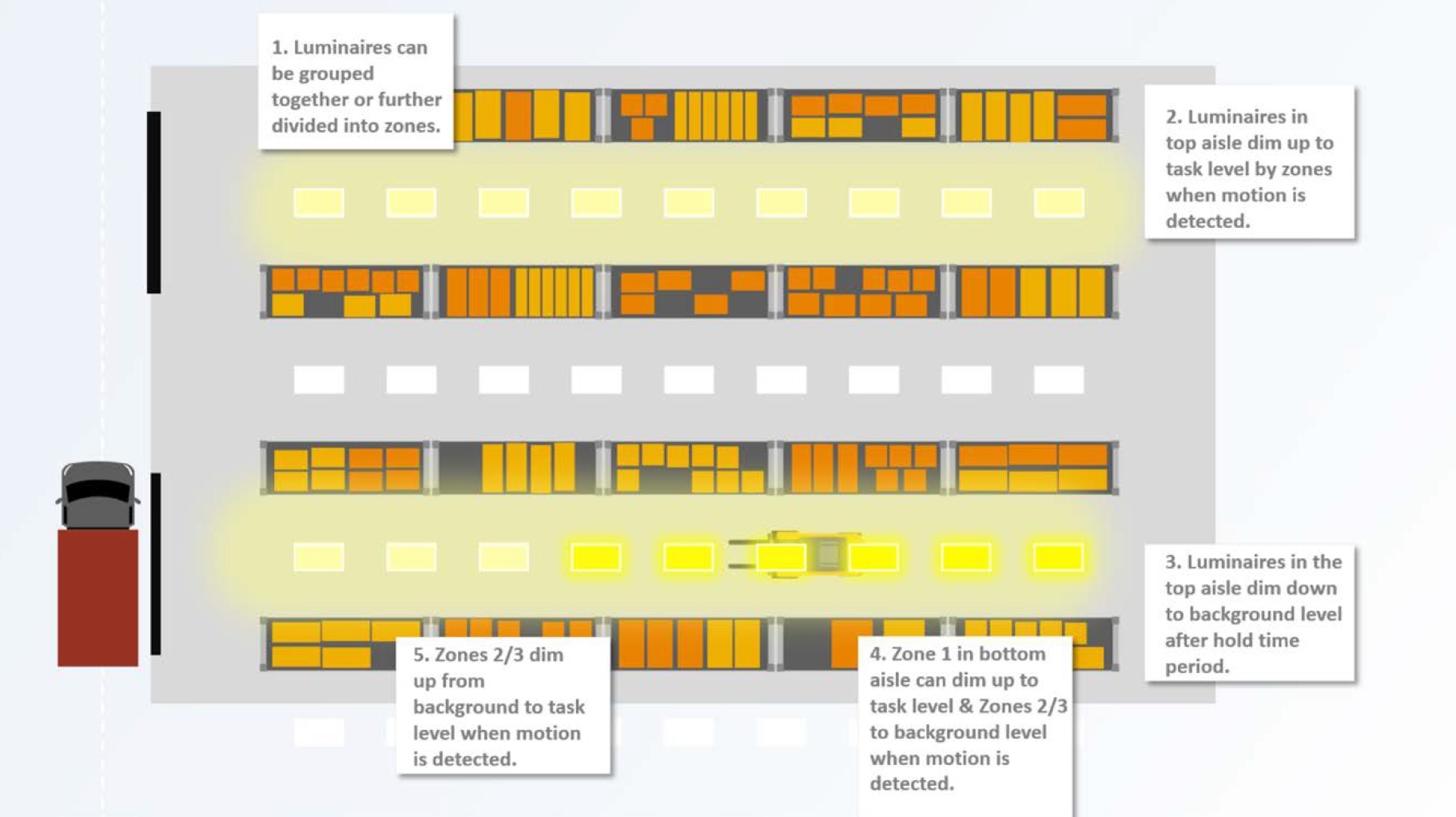 5. Zones 2/3 dim up from background to task level when motion is detected 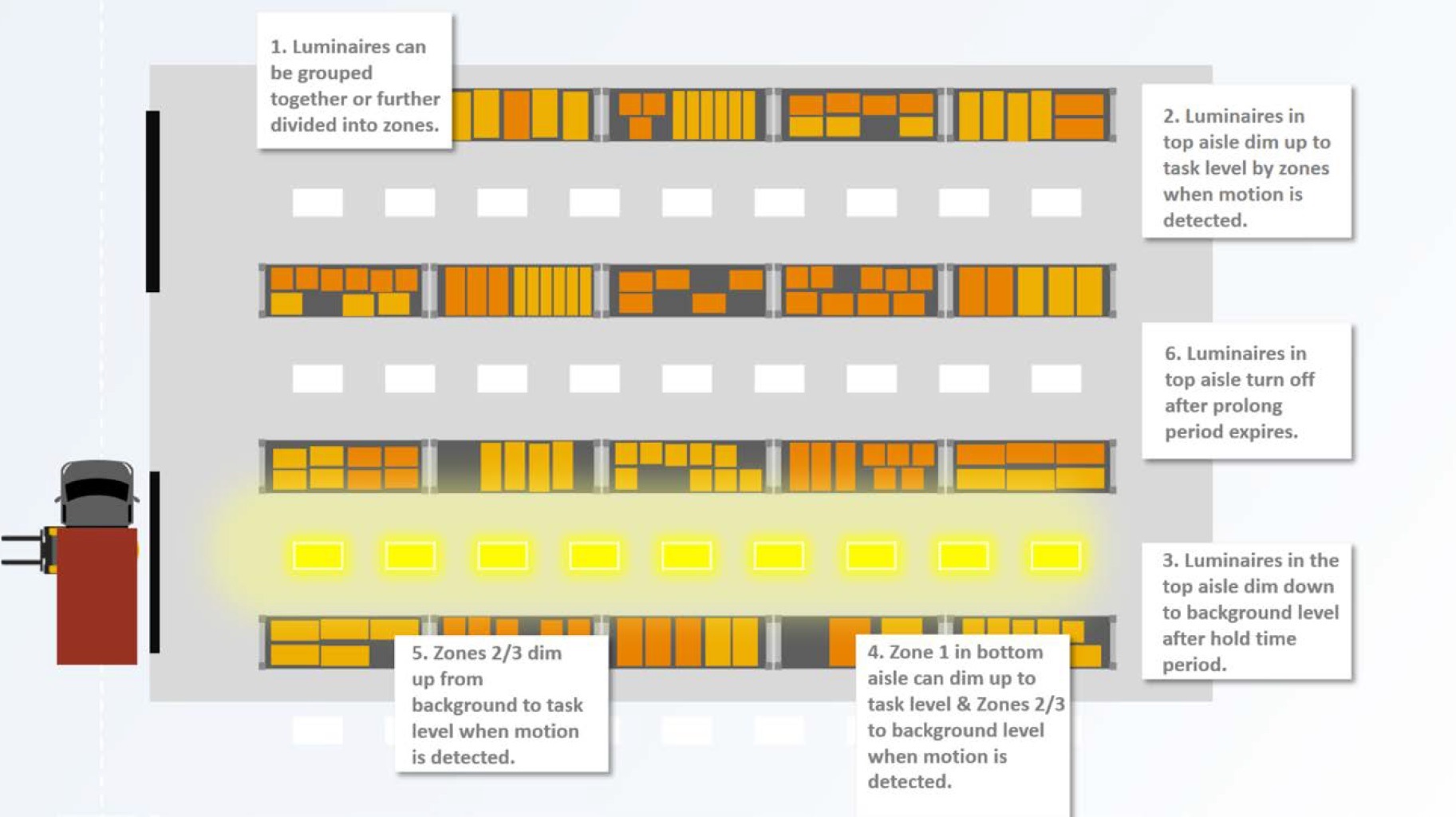 6. Luminaires in top aisle turn off after prolong period expires